These are just a few suggestions for activities throughout the year in Crete and it’s unspoken beauties.

Kolymbari is the place we love for its unlimited beauties but also for the people that live in it. These are simple people. with abundant Cretan bravery and magnanimity, who-even in this hi-tect century – still maintain intact the traditions and customs of the island. Kolymbari is about 24 km from Chania city center. Neverthless, it has lost nothing of its picturesqueness as it remains always a small fishermen’s village. Down in the port, you may see dozens of caiques and fishermen getting ready every day to go fishing. There are quite a few beachside and roadside tavernas, which can always provide fresh fish and other local delicasies. An endless beach streches along all the above villages where the visitor can enjoy crystal-clear waters. It is made up of pebbles and sand, whereas some local businessmen have turned parts of it into organised plages. The accommodation is ideal for hiking in the scenic area attractions, biking, diving and swimming at the numerous beaches of the northwest coast. The village is famous for its fish taverns to visit them, like taking a walk through the narrow streets or enjoy your coffee overlooking the harbor.Also you can find a supermarket, pharmacy, Post office, health center, rent a car and many other. Every Friday you can visit the local bazaar and buy many fresh vegetables, fruits and fish.

3km. to the west of the Monastery of Gonia we come across Afrata. The village has 2 cafes and few tavernas, which serve Cretan specialties. Northeast of the village, the road ends at a beautiful small cove where you can swim. The sea lovers will enjoy diving. As we go on our tour we see Rodopos. This is the biggest village of Akrotiri (i.e.: Cape) with quite a few small shops. At the center of the village you may admire a Venetian manor. The way from here and uphill is difficult, as there is a dirt road for most of its length. It starts from the small country church of Saint John-Giona, it goes on until the deserted monastery of Saint George (the old Monastery of Giona) and its ends up to Menies and ancient Diktynna.

Chania, the noble city of the southern Mediterranean ..

One of the most charming cities in southern Europe. A mixture of cultures, people and centuries of history. Venetian castles, Roman baths, Byzantine churches, Turkish minaredes. Ichni the Phoenician civilization, Saracen bays, Wild gorges, labyrinthine caves, inaccessible paths, next to the bustling, cosmopolitan city life both by day and night.

Chania presents a unity of contrasts!

Omalos Mountain, Old Roumata, Askifou and Elos. Unique destinations in the heart of winter, with multiple opportunities for many activities. These separate corners of Chania present through today ‘trails’.

As Chania, Crete is not just for summer … EXPLORE IT!

Some interested archaeological sites such as Knossos, Phaistos, Zakros, Malia, the Archaeological Museum of Chania and Heraklion, await summer or winter. There are also a large number of monasteries and Byzantine churches. You can also visit the old Venetian town of Chania, with its nightlife during the winter and summer. Castles and beautiful scenery will offer you a great experience and rich knowledge of the history of the island, too.

One kilometer west of Kolymbari, we come across the historical monastery of Gonia(Panagia Odigitria, i.e. Virgin Mary the provider of Guidance) and the Orthodox Academy of Crete. The monastery of Gonia was founded during the Venetian Domination and its roots are found in the myth of vision. The myth starts from the Temple of Diktynna Artemis Vritomartyr, the ancient goddess of West Crete. At one time while being persued by the Corsairs, the monks built a Temple dedicaded to the Assumption of Virgin Mary on a spot below the Temple of Diktynna Artemis. In the beginning of the 16th century, Saint Vlassios came to join their ascetic life. One night, while he was praying, he saw Virgin Mary in a vision and the led him to the spot where she wished to have a monastery built to her honor. This monastery started being built in 1618 and was completed in 1634.

Right next to the Monastery is the Orthodox Academy of Crete (OAC). The Academy is a utility foundation, which belongs to the See of Kissamos and Selinos. It is known wordwide for the conferences it organizes and for the various activities that it develops which aim at meditation and solution of scientific, medical, cultural and religious problems.

Saint John left Azogyre with the blessings of the Abbot of this great retinue and after crossing the mountains and the ravines to the north of Selinos and Kissamos, he arrived at the cave of the village Spilia(i.e. cave) and he stayed therein for approximately six months. Since, all around that place were shepherds and many farmers, he departed for Gouverneto. Still, before leaving and as he was praying he left, as a mark of his passing through, the healing holy water (by hitting his stick on the rock) which from those days until now remains a blessing to the Christians. In the 17th century and for at least one century, the Cave of the Saint was used as Nunnery. Graves, foundations of nun’s cells and a big water rank still exist even today…

The Monument Olive Tree of Vouves 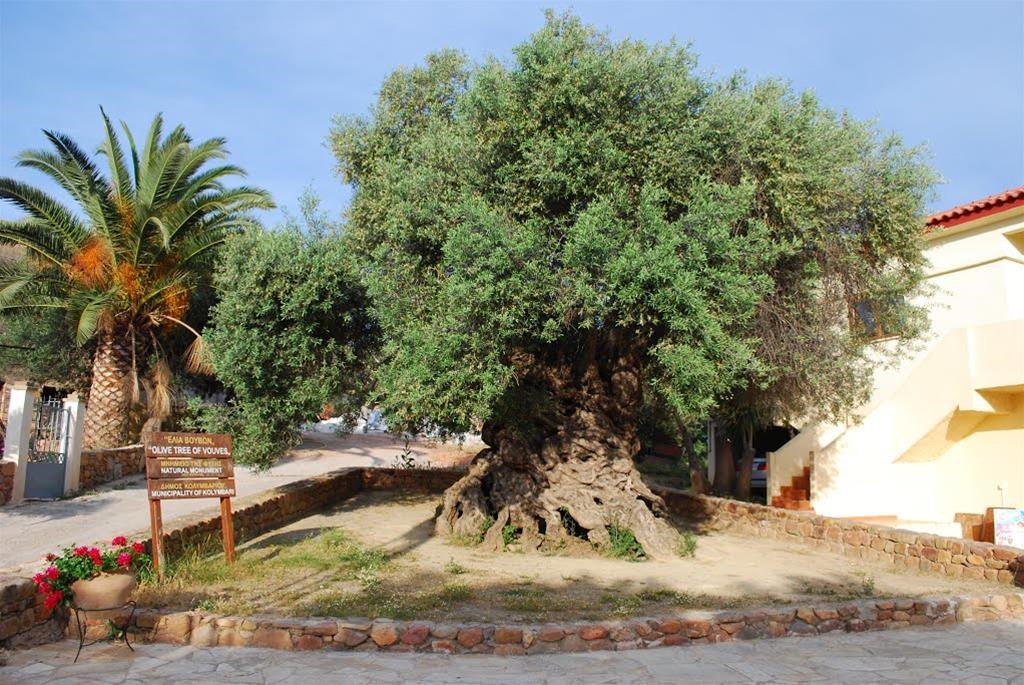 The Olive Tree Museum of Vouves is ideally located next to the Monumental Olive Tree of Vouves, the oldest olive tree in the world, which is visited by approximately 20.000 people every year from all over the world. The Monumental Olive Tree of Vouves has been declared as “natural heritage monument” by decision no 603/17-2-1997of the Secretary General of the Region of Crete, due to its special ecological and historical importance. There are at least ten more monumental olive trees in this area, namely the same number of trees as in the whole of Crete. This fact testifies to the long-standing relationship between the residents of this area with the olive tree that dates back to antiquity.

The Temple of Michael the Archangel with mosaics, murals and graves in the interior and exterior area. It is a paleochristian Temple, built during the reign of Emperor Justinian (482-565). It has a common architectural type with the temples in Ravenna Italy and also in Syria. It became the seat of the Episkopi of Kissamos in 1818 when Melchisedek was bishop. The Turks hanged the latter together with the teacher and deacon Kallinikos in 1821. Excavations are currently effected in order to explore the area even more.

It’s located in Prodromos of Deliana village. It is built in 1260 at the base of a temple that was already there. Its wallpapers were drawed in the first quarter of 14th century from the painter Theodoros Veneris.

On th eend point of the Cape of Spatha (Menies) are maintained even today, the ruins of the Temple of Diktynna and of a temple of the era of Andrianos (524-519BC). In the valley west of the Temple, there are ruins of buildings and of Roman aquaduct. Diktynna was a very ancient Cretan Goddess. Pilgrims with offerings arrived at her temple from all places of Hellas throughout the Roman and Hellenistic period. They walked to this places barefoot according to the tradition, in order to have direct contact with the earth and nature wich has worshiped in the face of the Goddess, as she was the Goddess of hunting.

Seventy species of different orchids as “Ophrys Cretica” and many others on the island, many herbs as “Dictamnus Of Islands”, “Salvia Viridis» and trees as «Juniperus Oxicedrus” and “Cupressus sempervirens”, which is the cypress tree that produces the best flamenco guitars in the world.

If you like to observe nature then in some of our mountains, you will find many species of birds like the Eagle “Cypaetus barbatus”, the so-called «Aquila chrysaetus”, unique animals such as KRI – KRI “Capra aegagrus Cretica “and many others, more than 200 species of endemic plants and trees.

Golden-green olive groves and the picking of valuable crop during the winter, orange trees in bloom, with sweet scent and golden fruit in the spring, the scent of thyme and bee sounds open all summer to produce the Cretan honey, the harvesting of grapes and visiting the wineries during the autumn and the delicious flavors of traditional cheese products.

Omalos Mountain
Omalos Mountain it’s not only the Samaria Gorge in the summer and the snow on winter days. All Plateau can offer unique emotions to nature lovers and not only.
Especially this period over the snowy landscape that will be repeated and certainly the next few weeks, visitors will have the opportunity to spend pleasant weekends.

Kallergi Refuge
The Kallergi refuge of the Mountaineering Association of Chania is a favorite place on the weekends for many of Chania citizens. The shelter offers a comfortable and pleasant stay to its guests. The visit on the shelter provides the opportunity for numerous activities. There are opportunities for skiing and sledging outside the area of the shelter. When it does not snow are dozens of opportunities for hiking trips to Melidaou, Psarrou and other.

Other Activities
The visitor can follow the olive harvesting, and the activities of the shepherd as milking, especially this season and prepare cheese. This is often done with tourist groups.